Xabier Zubillaga, proposals from the Diaspora: “An international network of Basque schools is possible” 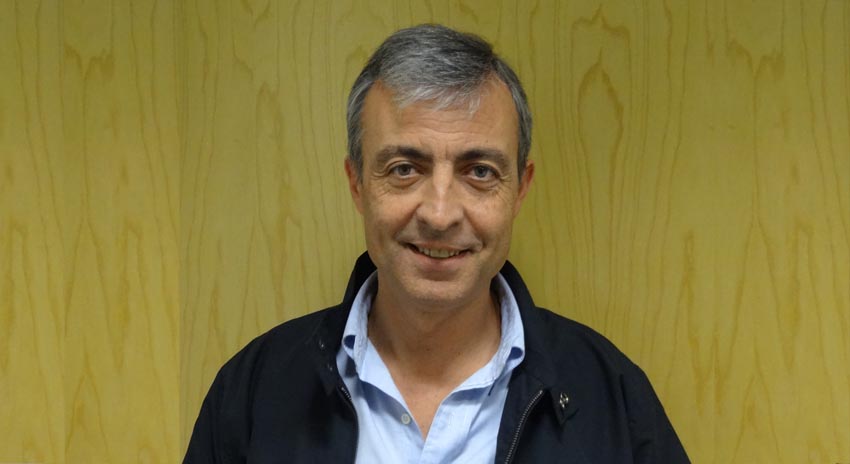 Basque born in Argentina, Xabier Zubillaga has been creating projects his entire life to unite the Basque Country and its Diaspora.  He sees potential, but not as much boldness and support on the part of institutions.

Joseba Etxarri.  He sees it very clearly: “A country as small as ours needs us all, it can’t ignore the Energy that exits in the Diaspora, profoundly Basque and ready to help and support projects that would benefit our language and culture, our identity, our economy and the best future for us possible.”  He says it convincingly, and far from flinching from the challenge that this commitment presents, with a track record of commitment to the Basques in the Diaspora and the Diaspora in Euskadi.  His resume says that he received a degree in economics from the University of the Basque Country (EHU-UPV), with postgraduate degrees in International Trade, Marketing and Business from the University of Buenos Aires (UBA), and he has also been the director of the Basque-Argentine Institute of Cooperation and Development.  However, he is also a dantzari and a dance teacher at this Basque club, and currently a member of the board of directors of the Euzko Etxea in Necochea, as well as of FEVA among other things.  We spoke to him a couple of days before the World Congress of Basque Communities that is being held in Vitoria-Gasteiz October 7-9.

You are worried about the Diaspora and a certain disaffection towards the Basque Country if no shock therapy doesn’t intervene.

-It’s not a cliché, it is true: there are many Basque descendants outside of the Basque Country and all of this energy needs to be channeled for the benefit of all.  The longer it takes us to do so, the more we lose.  The World Congress that is starting now is a wonderful opportunity to define and finalize ideas to develop jointly with the Diaspora.

This year you are here as a listener, but at previous congresses you served as a delegate or as a participant in Gaztemundu, promoting concrete measures.

-Things like a common logo for the Diaspora, writing under that the name of your particular Euskal Etxea or the creation of a “Diaspora Day" to give it the most visibility possible in the Basque Country….Some of these ideas were approved, but later they were never solidified.  Recently, I proposed that Korrika 20 begin in 2017 in Argentina, to later continue its course through Euskadi, to call the attention to the Basque language and Basques in Argentina and to the Diaspora in the Basque Country; the baton could have been carried, for example, by the former president of Uruguay, Jose Mujica, it wouldn’t have been difficult.  We need these kinds of ideas even though AEK doesn’t seem to be for it, but who knows if we are still on time and it could be reconsidered.

Am I wrong if I say that your excitement, work and enthusiasm is due to the creation of an Ikastola in Necochea?

-In 2009 I supported, along with a group of people, the creation of a school that we call Ikastola that began with 32 children and that when I left it, in 2013, already had nearly 200 students; there, students are taught classes on Basque culture and come out familiar with and with a certain level of Euskera and our culture and reality.  But in reality the proposal was much more ambitious and consisted of creating an international network of Basque schools united by its Basque conexion that would contribute to the diffusion of our culture throughout the world.  As there are English, French, or German schools, agreements could be signed between Basque clubs and the school that has a good relationship with them in its city, so that the Basque clubs or Basque teachers from the Basque Country could teach classes on Basque culture, beginning with a pilot project and eventually creating a network.

Similar to the work done by Etxepare but for youth?

-In my opinion, what is learned as a child marks you for life; and when you engage a child, you also engage parents, grandparents, and you have a huge multiple effect among people who, Basques or not, become familiar with the Basques and their culture.  These children would be the future leaders in these places and would collaborate on initiatives that they could carry out jointly. This international network of schools-Ikastolas would also give work to teachers from the Basque country in a moment where they dont get any in the Basque Country.  A special degree emphasizing Diaspora could also be included in the education degree.  They could also go there for their training, like today at the Ikastola in Necochea; there are some other examples, like the Euskal Echea high school in Llavallol, or to the Ikastola in Boise that are doing well, but with fragmented efforts, without an integrated international plan.

You are convinced that the Diaspora has a lot of potential.

-I know Diaspora well, I live my Basqueness with a foot here and another there, I see that we need a strategic plan created by the institutions and that other Basque Government departments can support the work done by Foreign Affairs. In the Diaspora there are many valuable people that only require a road map in order to get going.  We need people in the institutions that know how to generate, maintain, and nourish this excitement that exists in the Diaspora for our common culture and identity and channel it.  Hopefully the World Congress will be a step in that direction.