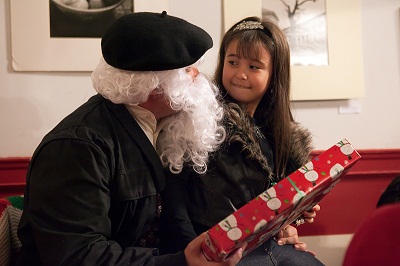 Today is Santo Tomas (Saint Thomas Day), a traditional feast day that is celebrated in some parts of the Basque Country around the Christmas market and by eating txistorra. New York’s Eusko Etxea celebrated last weekend, with a resounding success, gathering many people in its clubhouse in Brooklyn. The Olentzero was even there, and managed to attract a large group of txikis and their parents; while the call of the St. Thomas fair did the same with the club’s young and not so young. The festivities lasted until dawn. There was also talo and pintxos of txistorra; as well as cider and Rioja wine provided by the Txikito restaurant and the white bearded Olentzero played with style by Iban Ubarretxena.

New York, NY. The Euskal Etxea in New York organized a wonderful celebration of Santo Tomas last weekend gathering many members and friends at the clubhouse in Brooklyn.  The club put two traditional celebrations together: that of Santo Tomas that is celebrated around farmers ’ markets in many areas in the Basque Country and that of the arrival of the Olentzero which notably increased the attendance at the event.

The festivities began with a fair at the clubhouse, where booths were put up with txistorra, talo and sandwiches.  Eder Montero, from the Txikito Restaurant in Manhattan, contributed to the party by providing cider and Rioja wine at the event to which many in attendance took note, creating a lively atmosphere, as indicated by club members to EuskalKultura.com.

At 18:00 the guest star appeared, Olentzero, played this year by Iban Ubarretxena.  The youngest members of the club were really excited and nervous awaiting his arrival and each waited patiently for their turn to sit on his knee and tell him what they wanted for Christmas.

The atmosphere was wonderful and some members participated in the workshop on Basque Christmas carols, conducted by Aitzol Azurtza.  The afternoon passed but nobody wanted to leave, and so the party lasted until dawn, leaving New York’s young and old alike with a great memory.