New York’s Eusko Etxea celebrated Aberri Eguna, the last one before the Centennial of the center 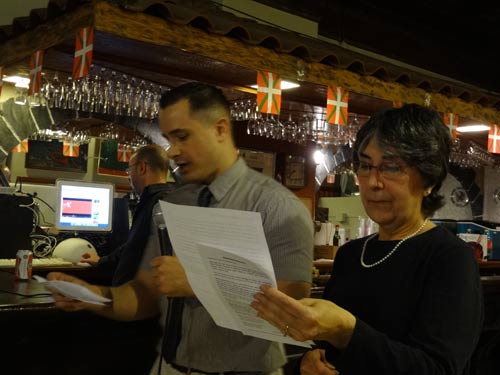 Aitzol Azurtza and Anna Mari Aguirre reading the 2012 Aberri Eguna communication in Basque and English at Eusko Etxea of New York. The center will celebrate its Centennial in 2013 (photo EuskalKultura.com)

Aberri Eguna is a date marked in red on the calendars of many euskal etxeas around the world. Many say, in fact, that it is celebrated more than in the country itself, maybe out of nostalgia and the homesickness that comes from being away. We’ll begin the chronicle of Aberri Eguna 2012, in New York, with more to come as information is sent to us from various centers and Basque communities. In New York’s case, this celebration coincides with the preparations of the Euskal Etxea’s Centennial, whose Aberri Eguna celebration in 2013 is announced to be particularly relevant.

New York, NY.  The Eusko Etxea of New York, the eldest Basque club in the US, celebrated Aberri Eguna  last Sunday as it usually does, at the clubhouse on Eckford Street, beginning with a catholic mass in Basque at noon celebrated by father Josu Iriondo, one of the bishops of the Archdiocese of New York.

A whole day program, starting with an aperitif that included a varied selection of pintxos prepared by Iñaki Lete, who also prepared the dinner, served to attract nearly 100 members and friends of the club.  Lete who has lived in the city for a number of years has collaborated with the Eusko Etxea and Aberri Eguna in many occasions.

Informally, around the center’s bar, tasting pintxos and drinking wine led to various generations, from the Basque Country and the US, to discuss current issues including the centennial celebration in the making, with a full program of celebrations.

Just before dinner, around 5pm, members of the Eusko Etxea, Aitzol Azurtza and Anna Mary Aguirre read a communication in Basque and English, respectively, regarding Aberri Eguna, the forthcoming centennial of the entity, the 755th anniversary of the bombing of Gernika and Durango, as well as the 500th anniversary of the conquest of the Kingdom of Navarre by Castilian troops, ending with all in attendance singing the anthem of Navarre, whose lyrics had been distributed beforehand.

The day concluded with singing, dancing and music, with both American and International components, as musicians and Basque groups, including Gari, who had some fans present.  Since Monday was not a holiday in the US, the meeting broke up little by little as the day wore on.