Nancy Zubiri: “I like to think Euskal Kazeta helps the next generation become interested in their origins” 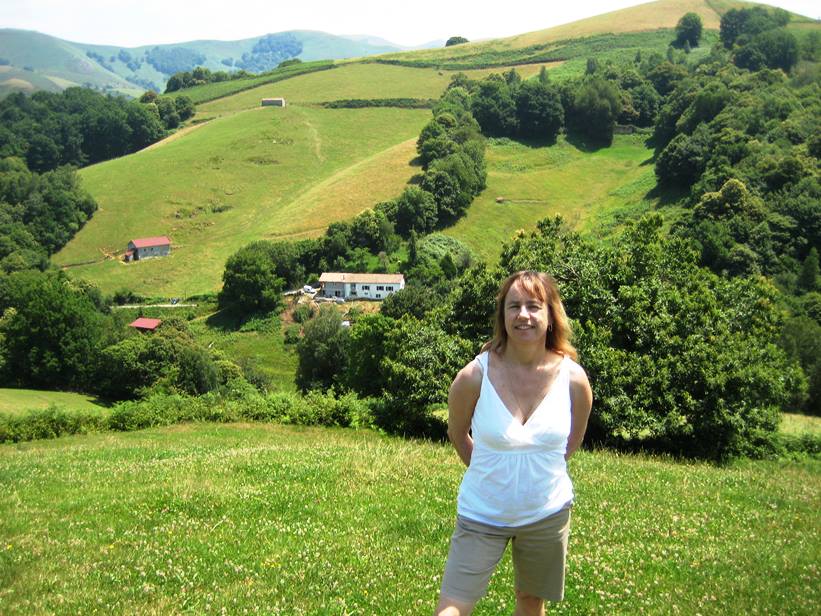 Nancy Zubiri, on one of her visits to the Basque Country (Photo: Nancy Zubiri)

With a reporter's instinct –“I wanted to study journalism but Berkley didn’t offer that majori so I studied political science”– San Francisco, California native Nancy Zubiri is a full-time teacher at Venice High School and the main writer and editor of Euskalkazeta.com, in her spare time. “I’d like to dedicate more time to the website. When I have free time I really enjoy working on it; one of my favorite topics is the Basque community and I love to write and inform about it,” she told Euskalkultura.com.

Ander Egiluz Beramendi – Venice, USA. Right after she finished her university studies, Zubiri started working as a journalist for “small newspapers,” as she said. But she made it all the way  to The Oakland Tribune. While working there she got a grant to write A Travel Guide to Basque America (University of Nevada Press), a comprehensive one-volume encyclopedia of the Basque communities in the U.S. The book was published in 1998 and it rapidly became a best-seller. In 2004, the publisher asked her to update the original work for a second edition that was launched two years later. After that, she felt she had too much information left and that “it would be a shame not to do anything with it.” That’s how, in 2009, she created Euskalkazeta.com. She has recently redesigned the website.

- Euskal Kazeta (E.K.) debuted its new look a couple of months ago. Why did you think it was the right time to do it?
- Anytime is the right time if the old design is not working, and for us it was not working. It also happened that I went to a convention where I was introduced to this new site that was inexpensive, so that made it the right time.
- What have readers told you about it?
- I didn’t really get a lot of feedback regarding the design. People sometimes comment on articles, but not that frequently.
- Interaction with the readership is a key feature for websites. How do you do it?
- My experience tells me that many people don’t feel comfortable putting their names on a website to comment on an article. Some do, but the number one way I get feedback is Facebook. I learn a lot from there, it guides me.
- In which way?
- Last year, for example, I went to a dinner in Chino where they recognized Basque immigrants that came to the U.S. a long time ago. I uploaded a picture of that group of people and I had over a hundred likes. That was surprising to me because it was not big news, it was not an article. But people like to see pictures of people they know, so now I try to do more things like that.
- What is the average E.K. reader like?
- Most of our readers are from the U.S. The second largest group is in England – that makes sense because we write in English, and I know there are many people of Basque descent in England. And the next group is from Spain. Most of them are young readers. They use internet more, so it’s natural.
- Some Basque communities are concerned about the next generation − they don’t know if they will keep the traditions. Would you say E.K. helps the next generation to be interested in their origins?
- I’d like to think so. I spend a lot of energy working on the events page, I put out all the significant events that Basque Clubs in the U.S. organize. My goal is also to attract people that might not be very involved with the communities to those events. The events page is one of our most popular pages and it takes a lot of time.
- What do readers like the most about E.K.?
- Our number one page is Basque recipes. Many people come to our website through Google, when they look for Basque food. If you Google Basque recipes that is the very first page that appears. We get between 80 and 180 views every day just for that. It was my husband’s idea to create it and we are very proud of it.
- Every now and then E.K. publishes articles by other journalists. Are those one-time contributions or do you have people working with you?
- Mostly it’s people I got to know over time and I ask them to write an article or they offer themselves to write a story, it’s a combination of both. Also my husband, Robert Lopez, a former LA Times journalist, has helped me a lot. He’s been my main contributor through the years, I consider him a partner in the business.
- Many times, along with an interface update, websites launch new sections. Are you planning to do that in the near future?
- Not really. My number one goal now is to find time to add more stories. I could work in E.K. full time, there are enough things happening every day in the Basque communities, but I cannot and I feel a little bit frustrated because of that. I have to work and I have a house and a family.
- So, when do you find time to write?
- I don’t know. Sometimes I’m inspired and I drop everything and don’t clean the house (she laughs). It’s a hard work but it’s really worth it.