Basque students in Basque clubs and lectureships can travel to Euskal Herria; all they need is your “like” 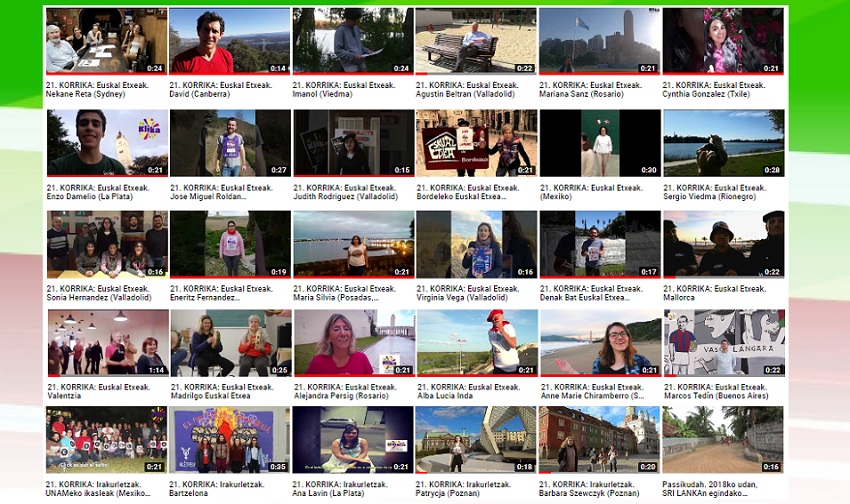 Images of some of the videos entered in the contest

Donostia-San Sebastián. In hopes of supporting Korrika 21 the Etxepare Basque Institute and the AEK cooperative launched a video contest whose first prize is a trip to Euskal Herria and a stay in a Barnetegi to learn Basque.  The contest is aimed at Basque students in Basque clubs and lectureships around the world, who in 20 seconds should present and promote participation in Korrika from a significant site in their city.

There are videos from the US, all over Argentina, Chile, Mexico, Australia, Poland, Spain, France…even from Patagonia to Sri Lanka.

The videos have been uploaded to AEK's YouTube channel and students are hoping for the largest number of votes or “likes,” to win the prize.  Here you can see one video after another.  The material is organized in two categories, one for students at Basque clubs, and another for students at lectureships.  Voting is open and will remain so until April 1.  The name of the winders will be published on April 2nd.

The race in favor of Euskera, or Korrika, takes place every two years and this year, in 2019, is celebrating its 21st edition leaving Gares-Puente la Reina in Navarre on April 4th to conclude in Vitoria-Gasteiz (Araba) on the 14th.