Aita Antton, new Basque chaplain in Idaho: “I want to help boost the spiritual life of the Basques in the US” 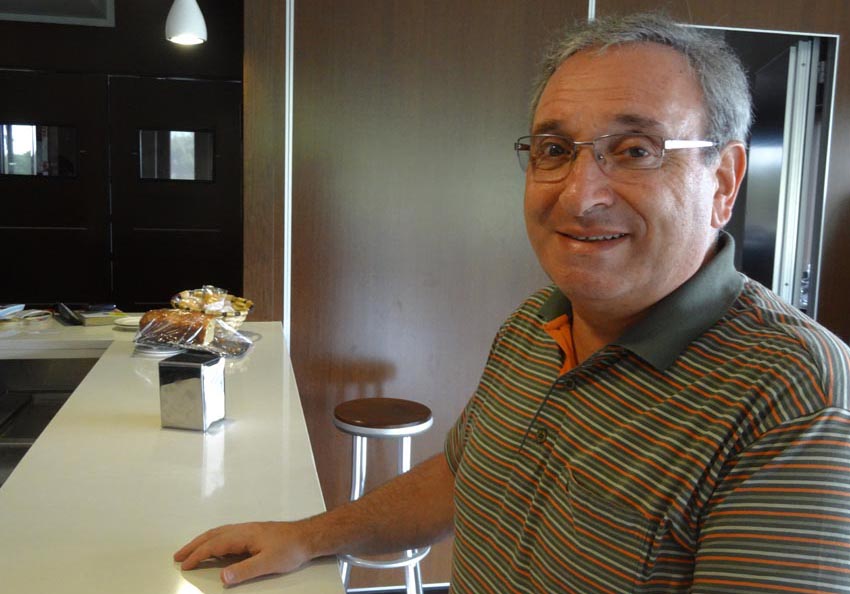 Fr. Bernardo Arregui, from Tolosa, was the first priest to come to the US to serve as a Basque chaplain in 1911.  Aita Martxel Tillous, from Xiberoa, who passed away in 2009, was the last.  Nobody was expecting a replacement but a few months ago Aita Antton Egiguren arrived to the US as the new Basque priest in Boise. EuskalKultura.com interviewed him .

Joseba Etxarri.  Over the last century, there hasn’t always been a priest to serve the Basque people in the US in English and Basque.  Over a century ago, Bishop Glorieux of Boise made a request for a Basque priest, “to take care of the Basque community in their own language” to his counterpart in Vitoria-Gasteiz. And that is how Bernardo Arregui came to Idaho’s capital in july of 1911.  Since then the Basque communities in the US have had, intermittently, a Basque chaplain.  That is how, in the last century, Patxi Aldasoro, Santos Rekalde, and Juan Mari Garatea came to Idaho.  Priests that came to California were Luro, Chalet, Copentipy, Sallaberemborde, Cachenaut, Etcheverry, Elizagaray and Tillous.  After the death of Aita Martxel Tillous in 2009, nobody in the states expected a replacement to serve the Basque community.  Nobody expected it, but it happened at the end of last year, and now Idaho has a priest whose main task is to attend to the Basque community, an important part of the Catholic faithful in a number of towns in the West.

-In a time where priests are scarce, with a high median age among them, some are talking about a small miracle to be able to have a Basque priest that is 61 years-old in Boise, with such a resume and a truly remarkable cultural and academic background.

I know that few imagined a few months ago that Aita Tillous would have a successor, but what is sure that certain circumstances came together and made it possible for me to come to Boise with the main task of supporting the Basque community and its spiritual needs.

-You were still teaching classes at the University of Louvain at the end of the year. How is it that you came to Boise?

It was a coincidence that just a year ago, driving from Louvain to Bidania, my hometown in Gipuzkoa, I had just left Bordeaux and I was looking for a Basque radio station and I found one from Iparralde where they were explaining that it had been so many years since the death fo the last Basque chaplain in the US. This started me thinking and I said to myself “why not me?” I only had a few years left before retiring and I always wanted, not to go back to the Basque Country, but may to serve Basques somewhere else. I thought that waiting to retire until I was 65, it could be so late to take that step, so I wrote to NABO, the North American Federation of Basque clubs and later with the Bishop of Idaho, until last May, when I had time and travelled to Boise for a week to see the place first hand and get to know the people, as well as giving them the opportunity to meet me.

-I see that it worked.

That trip confirmed what until then was only a thought or a mere possibility. In Boise, I saw that idea made sense and that there was work to be done and people in the Basque community who were ready to join forces. My welcome was extraordinary and John Ysursa, professor at Boise State University, and a member of the local Basque community, as well as an active and committed believer, prepared an intense program for me where I met the bishop of Boise, and key people from the local community as well as in the Basque one, I also got to know the area and the natural surroundings and they presented me activities that are carried out today. Afterwards, I met with my superiors and shared it with my brothers.

-Your resume is impressive. You are a Dr. in Theology, also an anthropologist, and an expert in compared religions, you have three master degrees and you speak ten languages from Basque to Chinese, including French, English, Spanish, Korean, Italian, Dutch, Portuguese and Thai…I think that you have also celebrated a mass for the Korean community in Boise. Everybody wants you.

Throughout my life, in different phases, i lived and i was able to visit many countries in various parts of the world, above all, but not solely, in Asia. I have lived in England, and studied in Canada and taught courses in many places. It was a great part of my life experience and social work developed in countries like Korea, Thailand or China, and is these cases the first thing is to learn the language in each country. Now, I have begun a new phase of my life and my main dedication refers to the Basque community, without jeopardizing other work that I will also collaborate in.

-The Basque Artzai Ona (Good Shepherd) Association has grown in Boise around you.

It is a Catholic Basque group which is participatory where we discuss and plan the pastoral action in Idaho and the surrounding states.  I haven’t been here for very long, but I am clear on what my goal is, to join in and collaborate to boost the religious life of Basques here, paying special attention to children, the ill and the aged.

-Next Saturday you will celebrate your first official mass in Basque at St. John’s Cathedral.

Yes, we have planned it very carefully with the help of a large number of members of the local Basque community.  It will be at 2:30 on March 14th.  The Biotzetik Choir will participate along with many faithful Basques.  We are excited and hopeful, with many plans and I want to take advantage of this to invite people to participate, and make suggestions and add ideas and proposals that will enrich us as Basques and as believers.  I live in Boise, currently at rectory next to St. Joseph’s school and can be contacted through Artzai Ona. I am at the service of all who want to contact me.