With Black Twig Cider House, Matthew Beason is willing to import the atmosphere of Basque 'sagardotegis' to the US (Photos: M.B.)

Cider expert Matthew Beason and chef John Eisensmith will open “a truly Basque 'txotx'” cider house  in late March in Durham, North Carolina, as the former told EuskalKultura.com. The restaurant will combine fast casual dining with top ciders from all over the world, including some from Euskal Herria. “As far as I know, it will be the first restaurant in the US where you will get up from the table to fill your glass directly from the barrel, the same way it's done in the Basque Country.”

Durham, NC, USA. Matthew Beason owns a couple of restaurants in Durham: Mattie B's Public House and Six Plates, with the latter will beeing completely remodeled and renamed becoming, Black Twig Cider House. Asked to describe his new endeavor, he responded it will be a “fast casual dining experience, with a large eclectic cider collection.” The restaurant will open in late March. 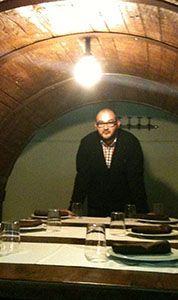 “As far as I know, it will be the first restaurant in the US where you will get up from the table to fill your glass directly from the barrel, the same way it's done in the Basque Country,” said the businessman. He added: “It will be a truly Basque txotx.” And those two characteristics ―the large and eclectic cider collection, and the txotx style― will be the distinctive trademark that will make the Black Twig stand out, in the opinion of Beason, who equally uses the words cider or its Basque counterpart sagardoa in his speech.

He discovered euskal sagardoa about ten years ago, when he reached the Basque Country on a trip to Spain, and since then, he likes to visit the Basque Country “as often as I can.” “I love the food, I love pintxos, and I love the way they dine,” he states. “Sagardotegis (cider houses) in the Basque Country are filled with barrels and, when people get up from their tables for the txotx (opening the barrel so diners can help themself to the cider, followed by a line of diners that fill their glasses without stopping the stream), it's like a show. It's a completely different experience that we want to bring to the US. You break the meal up, you don't eat that much, you experience different situations and talk to different people. It's like a ritual.”

Even if the txotx ritual will be the same as in the Basque land, the food will not: “Food will be simple, we won't serve txuleta or cod omelet. We'll offer different types of sausages, fries, and things alike. It will be fast casual, in and out.” The ciders will also be from a variety of origins: Germany, Italy, Basque Country, France, England, Asturias (Spain), the US… 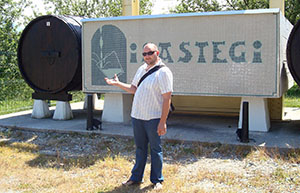 Matti Beason's passion for Basque beverages does not end with sagardoa, he is also fond of txakoli. In fact, he's been organizing the successful Txakolifest, in Durham, since 2007. “I think we started before Txikifest,” he pointed out, referring to the also popular txakoli event organized, annually in New York, by Eder Montero and Alex Raij, owners of Txikito. They are friends and, in fact, Beason has been to the txakoli fair in the Big Apple, but he has not managed to get the chef couple to Durham yet: “They're very busy, but hopefully they'll come some day.”

In his words, txakoli is moderately well known in the US, especially thanks to the Basque and Spanish food movement, which has grown considerably in the States over the last decade. However, he believes that cider, as a category, has much more room to grow. In fact, in the press release where he announced his decision to open Black Twig, he remarked: “Today, cider represents the fastest-growing segment in the beverage industry (in the US).”